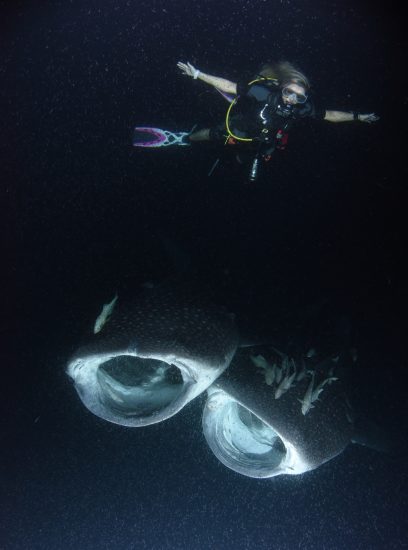 Whale sharks are on many diver’s bucket lists. I envy any diver that has been lucky enough to see one while diving.

These gentle giants of the oceans are, in fact, not whales, but very large fish. The biggest fish on the planet. They can grow to over 18m and spend most of their day eating. It takes a lot of filter-feeding to fill their large body, which can weigh up to 19 tonnes.

They are slow swimmers, no faster than 5kph, but they do embark on long migrations to their feeding grounds. Their flat head ends in a snout with sensory organs which look like whiskers. Their distinctive colouring stands out with grey, almost blue sides and white/yellow spots and stripes. Their body patterns are unique to every individual and can be used to identify them.

Their large mouth (1.5m in diameter) is lined with teeth, around 3000 of them! But they don’t use them at all; they are a redundant feature as they filter feed and process over 6000l of water per hour. They eat plankton, but also bigger bites such as shrimp, sardines, squid, anchovies and fish eggs.

Warm waters are their preferred habitat, and most of them live in the Pacific and Indian Oceans. Only 25% of the worldwide population can be found in the Atlantic.

They are usually solitary creatures, and very little is known about their life stages, habits and migratory routes. The most observed and studied are juveniles who spend some time in the shallows feeding.

They give birth to live young (the most ever reported was 300 at one time) which develop inside the female and are independent once born. It is thought to take 25 years for whale sharks to reach sexual maturity. This makes them vulnerable and more susceptible to extinction. They are long-living species; some can live to over 100 years old. Less than 10% survive to adulthood.

According to the IUCN, their population has reduced by over 60%, and since 2016 they are listed as endangered. Overfishing is one of the main causes, together with habitat degradation. Microplastics are another concern. As they are filter-feeding, they consume a large number of particles. Microplastics are accumulated in their bodies, and a study by Donati et al. has detected microplastics in their poo. This finding does not contribute to their wellbeing. Between being hunted for meat, finning, and lack of tourist industry management, the number of whale sharks keeps decreasing. Let’s hope that their situation improves, and we can all travel to see them sometime soon.