The HMCS Saguenay shipwreck has operated as a divers’ marine park for 26 years, and is one of the most popular tourist attractions in Nova Scotia for scuba divers. A community of divers and artificial reef experts aim to extend this marine park where the HMCS Saguenay rests, to an international diving destination in the near future. The Saguenay sits on her starboard in 95 feet of water, about a 25 minute boat ride from Lunenberg, Nova Scotia. (south shore of Nova Scotia)

In 1994, the Saguenay was sunk, and it has become an artificial reef. Its also home to plenty of seals that love to play with divers as they do safety stops. HMCS Saguenay was a destroyer of the St. Laurent class that served in the Royal Canadian Navy from 1956–1990, and later in the Canadian Military. She was the second vessel in her class to bear the name HMCS Saguenay, and the second Canadian naval unit. The ship was sunk after being abandoned by the Canadian Forces. For its comparatively spacious crew compartments, the Saguenay was referred to as a “Cadillac;” as it was the first Canadian warship to have a bunk for every crew member instead of a hammock.

Read about diving the Saguenay Shipwreck In The Scuba News Canada

The plan proposed by the divers and artificial reef experts is to have the HMCS Cormorant, a former Royal Canadian Navy dive vessel that’s been docked in Bridgewater since 2000, sunk near the Saguenay to provide a dive companion for visitors to Lunenburg. Initially constructed as the Aspa Quarto trawler in 1965, the vessel was acquired by the Canadian Forces in 1975 and renamed the Cormorant. The vessel remained in service until it was sold to a US buyer in 1997 and “parked” at Bridgewater awaiting disposal. The Cormorant also made history in 1980, when it became the Canadian Navy’s first ship to have a co-ed crew. The arrival of eight women on board ended the longstanding ban on women sailors, following a 1970 Royal Commission on the Role of Women in Canada’s decision.

Canadian Coast Guard released a Request for Proposals (RFP) to tow and scrap the steel vessel in June of this year. The Call for Proposals ended on August 10th and if the divers and artificial reef experts have their way, the Cormorant would be sunk as the partner ship of Saguenay’s dive.

There would have to be a lot of cleaning work completed before the Cormorant could be sunk. Canada has a 21-page report released by Environment Canada in 2001, detailing all the things that need to be removed from a container ship, before it takes its final “journey to the bottom of the sea”. These include oil and grease, toxic chemicals and waste, including asbestos and marine paints and coatings such as mercury, lead, copper, zinc, and PCBs. Canada’s 21 page clean-out report is copied all over the world for “swabbing” a vessel before it is laid to rest in the water. 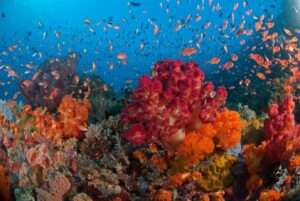