Dive Careers owner and PADI Course Director Mark Soworka shares how he chose the diving life to travel, and how his plan has worked (for the most part) to perfection.

I was lucky enough to start diving at the age of 12.

We had a teacher who was a passionate diver and got many of us students into a basic diver course. It was great to dive while at school, a way to escape down to Illawara (Australia) on the weekends.

Explore and experience as much as you can.

I started traveling independently quite young and managed to get the occasional dive in from the Arctic Circle to some special sites in the Americas and Africa as I backpacked around the globe.

It wasn’t until I was about 24 that I realized if I wanted to keep traveling, I would need to become a PADI® Instructor.

I became a PADI Open Water Scuba Instructor in1994 in Phuket, Thailand, and got my Course Director rating in 1998.

Since then, I’ve certified about 1,200 IDC candidates. With specialties and Emergency First Response® I’m at over 7,000 instructor-level certifications.

Have empathy for your students. We can all have a good laugh at some of the bizarre actions of some students, but we genuinely must want to help them learn.

Funniest moment on a training program wasduring an academic presentation. An instructor candidate used a firework for his contact (!): He handed me the firecracker, I lit it (not sure why) and threw it to one of the staff instructors who promptly threw it back to the front of the classroom where it went off.

The room filled with noise and smoke, but the candidate just continued with his presentation as if nothing was happening.

My fondest memory of PADI is the friendships. I love the fact that I can travel anywhere there is water and run into someone I know through diving.

Yesterday I was out in Hanifaaruu Bay, Maldives, with 80 manta rays circling below, and I ended up chatting with former instructor candidates on the surface, catching up on their lives.

I love seeing candidates who have worked for a decade as divemasters and never thought becoming an instructor was possible – problems with language, fear of exams, whatever – put in loads of work and effort to achieve the instructor rating. You feel it change their lives for the better.

Never stop learning and changing. There are so many paths you can take as an instructor, from conservation, photography, retail to management.

The secret to not burning out is simple: change. I’ve reinvented my goals several times during my career.

That’s the great thing about the dive industry: There is a whole world of opportunities.

I started Dive Careers in 2009. The idea was to put together a team of Course Directors around the globe.

I’d managed a large PADI Five Star IDC for many years. I was tired with staff and the headaches, and I was getting bitter.

Then I had an epiphany and realized it was time for a change. I fired myself and got back out on the road to travel.

Travel was the reason I’d become an instructor in the first place – I’d just forgotten that somewhere along the way with the weight of dive manuals, wife and kids.

The advantage of working for myself is thatI get to choose the locations I want to teach in.

It’s taken me to some great places.

I remember an IDC open water presentation in Cape Town, South Africa. The water was 8°C [46°F]. Snake-like creatures were swimming around us, and as I took a moment to look around, I realized they were cormorants diving down to us; there was a penguin on the surface, a seal playing in the background. It was a Blue Planet moment in the most unlikely of settings.

Generally, the best diving is when I least expect it. One of my best dives was diving in a wreck in the mouth of a river on the coast of India, being battered by hundreds of barramundi swimming in the corridors of the wreck.

The past couple of weeks I’ve dived with four-metre-long/12-feet-long tiger sharks and freedived with a couple hundred manta rays.

The key to running a successful dive business is customer service with an eye on the costs.

The current (COVID) situation has pushed me toward finding a way to integrate online learning into the IDC. That has opened the opportunity to conduct IDCs in some cool places, like on live-aboards and remote islands.

I haven’t experienced my proudest moment as a business owner yet. My goal is for Dive Careers (and the Five Star IDC Centers we work with) to train 365 candidates in a year. Averages out to one a day. We were very close before the pandemic, but not quite there yet.

I have been with the same partner, Malee, for 25 years. Separation, with me constantly on the road, is probably what has helped that relationship survive best.

We are normally in different countries and that has helped us forget at times that we are radically different people. Somehow it seems to work. I have my goat farm to retreat to and she has her building projects.

And I have someone to temper my excesses.

We have three kids. Malee wanted one to be a chef, one a builder and one an accountant. Figured that would be the best way to run a family resort as we got older.

Didn’t quite end up like that. The daughter ended up a great chef (pastries her specialty), but the sons both became dive instructors.

I just wanted them to leave the house and find their own lives, but I guess growing up in the dive industry has made it such an easy path for them to follow.

I’m proud to see them grow up to be nice people, polite and caring, but that is much more from Malee’s influence than mine.

What am I proudest of? That I’ve survived well without scrambling back to Australia for a suburban existence and a white picket fence.

Having said that, if I hadn’t been a dive instructor I would have liked topass the time playing with self-sufficiency on a small farm. That is now my goal for retirement. 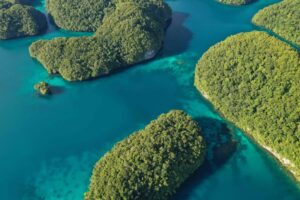 They Went to Work for the Animals