Nikon UK hosts an annual series of events for members of the Nikon Pro Services (NPS), introducing their company’s new products. Due to the COVID pandemic, these have been postponed for the past few years, but we were able to gather in Manchester to check out the new Nikon Z9.

The camera has been out “in the wild” for some time now, although supply chain issues have resulted in somewhat delayed deliveries. Rob McNeish of NPS introduced the headline specifications and how they fit into Nikon’s range. He stated that it is his opinion that Nikon sees its future as in mirrorless cameras. Currently, they will support both SLR and mirrorless, but his opinion is that new SLR models are unlikely.

The Z mount design incorporates some clever design engineering. Reducing the distance between the rear of the lens and the sensor offers some optical advantages. The Z mount’s flange to sensor distance is 16mm, whereas F mount’s is 46.5mm. This is shorter than the flanges used by all Nikon’s competitors. Unrelated but interesting to note is the fact that Nikonos’s is 28mm.

The principle advantage this provides is a shorter path for light to the edges of the frame. This translates into improved sharpness in the edges. Rob showed an example of comparisons between various mounts and edge sharpness, and it is a noticeable improvement. Nikon’s Z mount flange distance is shorter than almost every other manufacturer, and Nikon would suggest that this means that their edge sharpness will be better by design.

The mount has a throat (diameter) of 52mm, which allows for larger diameter lenses. More size equates to more light. This offers a potential for the design of faster lenses as the additional width offers the accommodation of larger optical elements.

It is important to note that if the FTZ adaptor is used, these advantages are moot. There is no optical advantage with the Z mount when using legacy lenses.

The Z9 has a 45.7MP stacked sensor. “Stacking” enables faster data transfer. Combined with a new EXPEED 7 image-processing engine, this allows for fast frame rates. Shooting in RAW, translates to 20fps, with continuous bursts of up to 1000 images.

Given that autofocus (AF) processing is carried out using sensor information, this speed helps to ensure fast and accurate focusing.

The electronic shutter allows for a maximum shutter speed of 1/32,000s, although flash sync is limited to 1/200s

The Z9 offers internally recorded RAW video at 8K 12 bit at 60fps with no pixel binning. It can capture 4K at up to 30fps with no binning and up to 120fps with binning. Rob informed us that the quoted figure is for 2 hours of recorded time at 8K without overheating issues.

The Z9 has numerous focus modes, including eye focus

Nikon has released the NIKKOR Z MC 105mm f/2.8 VR S micro lens. This is an important lens for underwater image makers and it was great to be able to try it out. In addition, I brought my own AF-S VR Micro-Nikkor 105mm f/2.8G IF-ED and D850, in order to compare the two. Lastly, the NPS team has a ZTF II adaptor, so I was able to test my 105mm on the Z9.

The testing was inevitably limited, as it was (firstly) on the surface and (secondly) based on somewhat limited time. The focus settings on both cameras were my standard macro ones: AF-C and 3D focus mode. I found that the Z9 + Z 105mm Micro’s AF was as accurate as of the D850 + 105mm Micro.

However, the Z9 exhibited the somewhat annoying behavior of racking all the way out and then moving in to achieve focus, whereas the D850’s AF moved directly to its focal point. This meant that the Z9 was slower to achieve AF than the D850. I should stress that this may be to do with a setting in the camera.

I was able to test the AF-S VR Micro-Nikkor 105mm f/2.8G IF-ED with the FTZ II adaptor on the Z9 too. This combination was less accurate and slower than either of the “native” lens mounts. While the conditions were not representative of underwater conditions, they were the same for each combination. In absolute terms and in the context of my limited tests, I could see no AF improvement with the Z9 over the D850’s (excellent) AF. This should be tempered by the fact that the D850’s AF is impressive, so it is wrong to think of the Z9’s as being in any way bad. My experience was that it was as accurate as of the D850’s, but slower when used with the 105mm Z lens.

I also tested the Z9 with the FTZ II adaptor and my AF-S FISHEYE NIKKOR 8-15mm f/3.5-4.5E ED. Again settings were AF-C with 3D focus mode. Perhaps unsurprisingly, AF was fast and accurate with this combination. I could not detect any difference in AF between the Z9 and the D850 with the lens.

The Z9 is a large camera. When combined with the FTZ II, it retains many of the dimensions of a large body SLR. In fact, the body’s stated weight and size is bigger than the D850. The camera does feel really good in the hand. I have always liked cameras with vertical grips, and the Z9 does not disappoint. In common with all Nikon Pro bodies, it feels robust, well balanced, and familiar.

Similarly, existing Nikon users will immediately recognize the Z9’s control layout. If you are used to using Nikon Pro bodies, the buttons are all in familiar places, with the only significant exception being the playback button, which is now on the lower right hand. Rob made the point that this may be better for shooting in a vertical format, but it will create challenges for housing manufacturers.

Part of the reason for the increased size is the EN-EL18d battery used by the Z9. This is a large high capacity battery. Mirrorless cameras need and use more power than SLRs, but many manufacturers have actually used smaller batteries, sacrificing battery life for camera size. Given that battery changes are harder for underwater photographers, it is great to see Nikon bucking this trend. Some of the other attendees have been using Z9s and the consensus is that it has around half the battery life of the D6, so is sufficient. Nikon is currently experiencing supply chain difficulties with the batteries.

The Z9 has dual CFexpress type B or XQD cards and will need fast cards to get full performance, especially for video.

Electronic viewfinders (EVF) are very much a personal like or dislike. The Z9’s seem adequate and has no blackout between frames unless shooting at very slow shutter speeds (1/8s). In common with other EVFs, there are various display options available and images can be reviewed in the viewfinder if required.

I do not have the opportunity to try out high-contrast scenes to see if the EVF blooms like many others.

As mentioned previously, Rob’s feelings are that Nikon will concentrate on the development of mirrorless over SLR cameras. Nikon is actively expanding its range of Z mount lenses, but Rob was not aware of any changes or additions to the current roadmap (which does not include a fisheye option). Nikon typically releases changes to the roadmap when announcing new lens releases, and they are formally announcing their 800mm f/6.3 soon, so they may announce a new roadmap then. 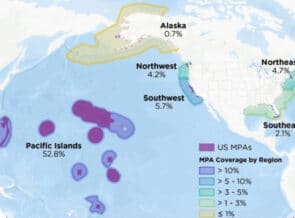 Rise In North Atlantic Shipping Rates A Cause For Concern 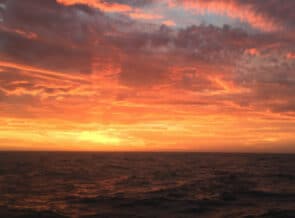 The Deep Ocean Is Warming With Climate Change 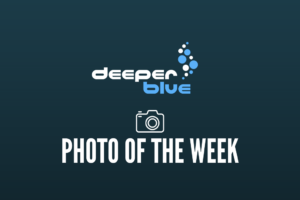 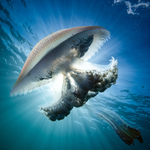 Photographers of the Week – Hannah Le Leu and Mitchell Romanowski