In Egypt, you can take wonderful boat rides on the Nile and admire the mighty crocodiles, but did you know that you may find similar creatures on the bottom of the Red Sea?

With its wide mouth, triangular head and flattened body, the crocodilefish’s resemblance to a crocodile is uncanny.

This bottom-dwelling fish relies on its strange body shape and coloration for camouflage, taking camouflaging to the next level, with special patches of skin that cover their eyes, providing them with ghost-like invisibility on the seafloor. They blend in perfectly, burying in the sand and ambushing their prey of crustaceans and small fish.

They usually grow from 40 to 50cm in length, but there are some majestic individuals that measure over 70cm.

Crocodilefish prefer shallow waters surrounding reefs, but can be seen in depths up to 50 meters.

The natural range of this species was limited to the Red Sea and most of the Western Indian Ocean until the construction of the Suez Canal in the late 19th century. This canal was built by Ferdinand de Lesseps to connect the Mediterranean and the Red Sea and shorten trading routes between Europe and Asia. The construction of the canal has brought numerous economic advantages to the region, but it has also brought environmental stress to the Mediterranean.

Red Sea species, such as the crocodilefish, have invaded the nutrient-rich waters of the Mediterranean and have significantly expanded their habitats at the expense of the native species. The migration of species is still happening, and marine scientists are referring to it as the Lessepsian migration, carrying on the legacy of the French diplomat who was responsible for the building of the canal.

Unlike land crocodiles, crocodilefish are harmless to humans, and divers can easily approach and photograph them as they are used to hiding in plain sight and are almost too confident with their camouflage. They are quite calm natured and won’t cause you any harm unless you have the misfortune of not seeing them hiding on the ocean floor and mistakenly step on the spines of their dorsal fins. 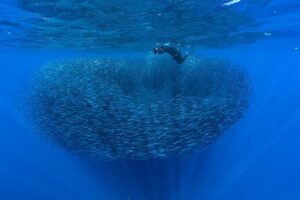 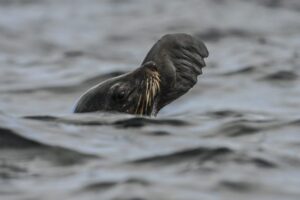 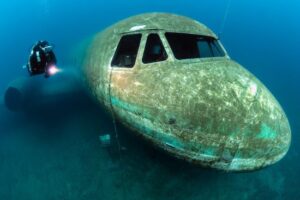