Emergency First Response® would like to congratulate the following Emergency Responders who put their training into action when called upon to offer assistance.

Action: While washing his backyard in the morning, Serafim’s father abruptly fell on his left side on a bucket he was using. Serafim immediately responded, helping his father/patient to sit down in what they judged at the time was a more comfortable position. As the patient was fully conscious, Serafim kept in contact with him the entire time and called the fire department, which quickly came to their aid. The patient recovered well from the accident, though he broke four ribs in the fall.

Action: Dawes was at her local supermarket when she heard a scream and went to see what the commotion was about. She saw a man lying unconscious on the ground, with store staff surrounding him not knowing what to do. An ambulance was called and, as the man had regained consciousness and was complaining of feeling sick, Nicky sat him up. She noticed a lot of blood and checked his head. It became clear that the bleeding was from his chin, which he had injured when he lost consciousness. Dawes stemmed the flow of blood from his chin and sat with him, calming him and reassuring him until emergency services arrived.

Action: One afternoon, a member of the restaurant staff at a local resort called the dive center, saying there was a drowning incident. The victim, a guest staying at the resort, was swimming when bystanders noticed she needed help. Klochek took the call and ordered the diveOceanus team to mobilize. While they started preparing the oxygen kit, Klochek raced to the jetty next to the restaurant where hotel guests had managed to get the victim out of the water. Klochek accessed the victim and noticed she was not breathing; according to witnesses she had been in the water for 20 to 30 minutes. Klochek started performing CPR while his colleagues delivered oxygen. Klochek and the team provided CPR for around 15 minutes before the medics arrived. Unfortunately, despite the best efforts from Klochek and the team, the victim died.

The post Responders in Action  appeared first on PADI Pros.

Prev前の記事へWhat is an SMB? + Tips on How to Use One
次の記事へAre You Properly Treating Shock Next 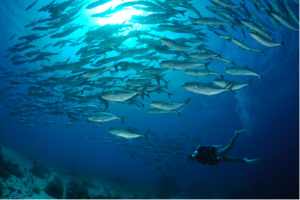 3 Reasons to Create a Sustainability Team at Your Dive Shop

Is Scuba Diving a Sport or a Hobby?