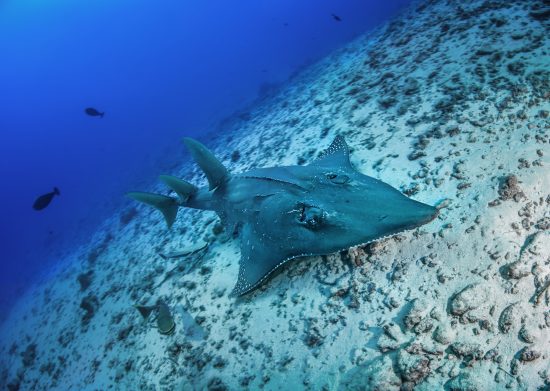 I love many things about diving, but what I love the most is the fact that it means constant learning. There are always new places to explore and new species to learn about.

This time it is the guitar shark. I had never heard of guitar sharks before, nor have I been lucky enough to see one. From its shape, the front of it looks like an angel shark, ray or a skate with a very flattened body, and the back of it resembles a shark. The guitar shark is actually not a shark at all but a ray from the Rhinidae family. The more common name for them is ‘bowmouth guitarfish’. They are rare species that reside in the tropical waters of the Indo-Pacific. The reason this ray has been nicknamed ‘guitar shark’ is the shark looking like a dorsal and tail fin.

Its body is rounded and very ray or skate-like with thorny ridges on top of its head. These structures often get caught in fishing gear, making them not very popular with fisherman. They have a dark grey / brown body with white spots with very specific, black markings on their pectoral fins. They can get large, up to around 3m, and weigh over 100kg.

Another name used for them is ‘mud skates’ due to their fondness for living in muddy or sandy places, on the bottom or hidden under structures or reefs. They are fast swimmers and feed on fish, crustaceans, and molluscs. They give birth to live young and usually have a litter of two to over ten pups, measuring around 50cm in length at birth.

Classified by IUCN as critically endangered with the population decreased by over 80% over the last three generations, they are mostly hunted for their meat and fins. The high price for their fins drives the demand for more and more dead guitar sharks. Quite a lot of them are also kept in captivity on display in aquariums. Their habitat is also being damaged, mainly by bottom trawling fishing.

It is truly not looking good for the poor guitar sharks (bowmouth guitarfish). If you are lucky enough to see one, make sure you take good pictures. You might be one of the very few!

Building Out Your Local Dive Guides

For potential and certifi